I’m more than half way through Veganuary now and so far so good. Here some of my surprising observations, other than it being an easy way to wean yourself off cake and beer after Christmas.. 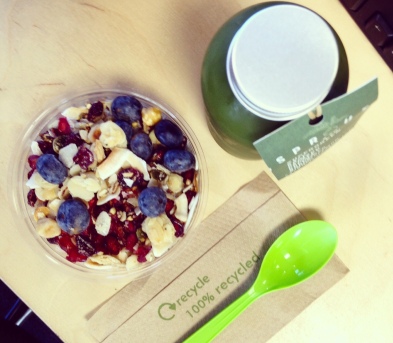 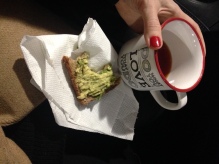 Breakfast on the run

It’s not the meat that’s the hard bit – it’s the dairy.

Meat and fish are surprisingly easy to cut out. That’s the straightforward bit. But the dairy, oh the dairy! Normally not eating meat I’d throw in a bit of cheese. Feta would solve a lot of problems. Or eggs. But these options are obviously gone. Then there’s also the not so obvious. The most bizarre things have milk in them – like dry roasted peanuts?! There is a lot of labelling reading and googling while shopping. But probably what I miss the absolute most is my daily flat white. Almond, soy, rice milk – they don’t cut it. They’re not meant to be served heated. Not to mention that fact that they are mostly water. A flat white is what I long for not bacon or steak like I originally thought it would be…

You really have to think before you drink

I knew Veganuary would mean laying off my favourite whiskey sours (made frothy with a little egg white). But I hadn’t factored in that most wine and beer are not vegan. These alcohols are filtered through fining agents to remove protein, yeast, cloudiness etc can involve anything from casein (milk protein) to chitin (fiber from crustacean shells), egg albumen (derived from egg whites), fish oil, gelatin and isinglass can be used. Thankfully there are lots of newer winemakers that are vegan-friendly using plant casein, limestone or silica gel for this process. You just have to do more label reading. If it’s vegan friendly it will say it. O’Briens have a really good selection and I picked up a few bottles in Dunnes Stores. I also called ahead at Forest Avenue the other night and they had two really good wines to choose from. Oh and Guinness is fully vegan as of last year so that’s keeping me fairly happy.

You have to be organised

It does take some planning to eat well and enjoyably as a vegan. We were filming just outside of the city the first week, in an beautiful location where the was food delightfully homely but everything had meat or dairy. I ended up eating a wrap with just cucumber, peppers and lettuce, toasted. No sauce, oil, nothing. The lady who made it said ‘Don’t choke on it now, I’d hate that to be my last meal’ as she looked at my ravenous face…

I learnt my lesson – call ahead! Most places are happy to accommodate with a bit of notice. Last week was much better. I had an incredible experience at Forest Avenue where they not only had a vegan tasting menu available the chef also sent us out a few extra tastes and mine were all vegan. Not once did I feel awkward. And the food was amazing. 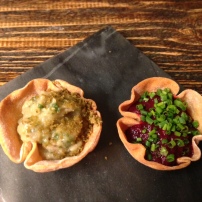 You will eat better

There’s no way around the fact that you’re going to eat a lot more plants. And more lentils, beans, nuts, seeds – all those things you usually buy and then forget about and you end up spilling all over the cupboard (maybe that’s just me). By default you won’t eat as much baked goods, mostly full of dairy and eggs. I’ve had a weird amount of birthdays so far in January and not had ANY cake. The most painful being TWO pavlovas in my house in one week. (Thanks Halina). And as I said there is a lot of label reading so you’re going to think more about what’s actually in everything you are eating. You start to make different choices.

Veganism is not as funny as it seems

I’ve been having serious guilts about how mean I may have been to vegans and vegetarians. Admittedly some the jokes are still funny (the one about the vegan on a plane, no?). It think it’s still funny because you actually have to say ‘I’m a vegan’ a lot when you are eating vegan. And then explain/ apologise about not eating animal products in so many situations – coffee shops, bars, restaurants, tea break at work, birthday parties. And then people make really unfunny jokes. That’s not great. I will definitely be more selective with my vegan humour going forward…

These things will really help

My vegan discoveries & saviours. Admittedly my list is probably very Dublin focused but might be some good ideas! 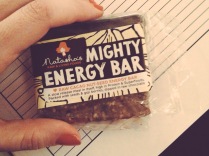 Cocu boxes – you can substitute any meat for tofu. Easy vegan on the go.

Keen vanilla almond butter – when nothing but sweet will do