Below are some really easy Chinese inspired dishes I cooked recently for a big dinner. There were no leftovers which I took to mean it went down well. Or maybe I didn’t cook enough…anyway here they are if you want to try them! 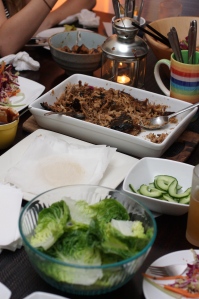 I remember my very first Chinese. It was at Furama in Dublin. You had to ring a doorbell to enter the sleek black restaurant where there was a curved bridge over a water feature full of goldfish – I was impressed! And that was before I’d had a belly full of new and exciting flavours.

Furama in the 90s - the beginning of my love affair. With the food, not him.

Chinese food still impresses and amazes me but also scares me a little – all that feng shui like business of balancing the sweet, sour, bitter, salty and most of all the mysterious umami can be off putting but once you have a few store cupboard essentials and are prepared to taste, taste and taste again you can replicate some of those oriental flavours at home.

I had the pleasure of having a whole day to work on this but if you are serving it for dinner most of the dishes can be prepped ahead – in fact getting the pork marinating the day before would be best and the slaw tastes better the longer it is soaking in the vinegary syrup.

Come fry with me!

These are a take on a dish cooked by Lisa Allen on Great British Menu. They were so easy to do and turned out to be such moreish delectable morsels that I will definitely be doing them again. 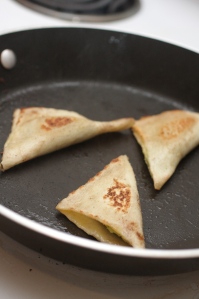 Half a bunch chopped fresh chives

Half an onion finely diced

Loaf of white sliced bread – cheap stuff is fine for this

These are an easy crowd pleaser best served hot and sprinkled with whatever green herbs you can throw over them and some lemon wedges. Oh and don’t forget some dipping sauces…I made Chinese Maire Rose sauce using Kewpie mayo, ketchup, paprika, Chinese five spice, shaoxing and lemon juice.

Approx. 500ml of vegetable oil (to come about 1cm up in a frying pan) 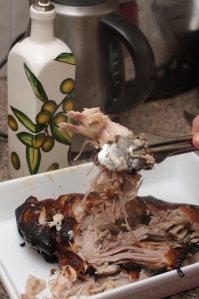 I cooked the pork on a barbeque because I’m down under and that’s what they do here but it would work just as well in an oven. I also used leg because it was the only organic piece I could find when shopping but this works really well with the cheaper, awkward bits like shoulder or hand because you are shredding it up at the end anyway…

For the Chinese pulled pork

Buns/ pancakes of some sort – ideally Chinese folding white buns, I couldn’t find these so we used steamed gow gee wrappers instead but you could use small white dinner rolls too.

This is too easy and it also cuts through the fattiness of the pork and the sweetness of the hoisin really well.

The veg was sent to the slaw-terhouse

You only get out what you pudding

Excellent line up for breakfast 🤩 made up of the winning producers of @irelandguide #IrishBreakfastAwards Apple juice from The Apple Farm, Tipperary Belview poached egg Sausage, pudding and rasher from McCathy's of Kanturk Dillisk soda bread from @ruacaferua Preserves from @filligans I love the breakfast awards 💚 they celebrate those serving up lovely feeds with local produce and if they even convince one hotel or B&B to up their breakfast game, that's a win for all of us! When it comes to breakfast, keep it simple, local and seasonal and you can't go wrong What's your favourite breakfast? 😛 #thisisirishfood #breakfast #brunch #eggs #sausage
Heading home, hoping to cling onto some of that clarity having a few beach days gives you 🤞🏖️😁 #newzealand #beachtime #waiheke